God Only Knows by The Beach Boys – Fingerstyle Guitar Tab

God Only Knows was written in 1966 by Brian Wilson and Tony Asher for The Beach Boys. The song appears on their iconic album 'Pet Sounds' and has become a massive success. Even Paul McCartney has said that it's the greatest pop song ever recorded, and you have to agree with the man.

God Only Knows is no. 50 on my Top 60 Fingerpicking Songs of ALL TIME list. If you've not seen the list be sure to check it out and sign up to my weekly email lesson. That way you won't miss learning any of these great fingerstyle songs.

What's truly amazing about Brian Wilson's writing is his use of chords. He bends and breaks the rules of traditional music theory, and does it in such a commercially friendly way that most people don't even realise the sophisticated chords driving the song.

It's because of his deep knowledge of harmony that he's written some of the most beautiful pop songs in history. I believe that his genius writing skills, combined with the incredible vocal harmonies, is the reason many of his songs have become timeless classics.

Here's a run through of the whole song.

Throughout the song I gently strum the chords (usually just the G and B strings) and pick out the melody at the same time. The intro is a good place to practise this awkward technique. 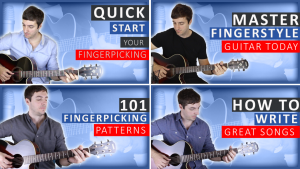 This sections of the song is similar to the intro, so it shouldn't be too tricky to get down if you're ok with that.

It all gets pretty wacky here. For the first four bars of the bridge you play the notes dead straight, it's the only part of the song that's not swung. It's subtle, but very clever indeed.

A call and response here, played to fade on the original recording.